Have you become a carpool hostage to your children’s musical selections?

No offense to Raffi, but… do you NEVER want to hear another Raffi song for as long as you live?  Or Barney the Purple Dinosaur?  Or {{{shudder}}} one of those recorded children’s choruses singing childhood favorites like “The Farmer in the Dell?”

I’ve also heard about this song called “Let It Go.”  Have you heard it?  😉

I’ve decided to share some of my favorite children’s musicians here at http://www.MsKatsMusic.com.  Some are clever songwriters, some put on an engaging, interactive live show, some infuse their catchy music with a fantastic sense of humor (in some cases aimed at their adult audience)… all traits that allow their children’s music to cross the barrier from “tolerable” to “enjoyable.”  And best of all: many are local!

Here’s my personal favorite, and probably who I’ve willingly and happily seen the most live performances of: Joe McDermott!

I’ve definitely seen an uptick in activity from Joe since the summer began. In fact, he’s playing TODAY, July 18th, at the Westbank Public Library at 10:30am. Still in your jammies? You can catch him midweek in Wimberly, or in Copperas Cove, or at the end of the month in Taylor. He’s all over the place!

So what do I like so much about Joe? His songwriting is brilliant. (For that matter, from a music-geek perspective, his album recordings/mixes are brilliant! But that discussion could get a little heavy for an online review.)

Joe McDermott’s lyrics capture the innocence, and imagination, and unique perspective of a child. Not an adult trying to be childlike, but truly, a child. Go and listen to Come to Hawaii. I swear, he might have been peeping into my childhood backyard, and it took me back to the elaborate interactive setups for play that my friends and I shared in the summertime.

I have never seen a kid refuse to participate with anything less than complete enthusiasm when Joe puts them on a Roller Coaster, and they’re thrilled to be Stuck In An Elevator with him. As a mama, I’ve had to physically restrain myself from joining in when everybody in an audience starts to Ride Ride Ride (spoiler alert: especially the porcupine).

In fact, I’ve had an embarrassing Joe encounter: One year at the Christmastime Cherrywood Art Bazaar the kids and some friends and I were taking a hot cocoa break and enjoying his show. The room got quiet, and I couldn’t help shouting a request: “Baby Kangaroo! Baby Kangaroo!” And my mama friend joined in, “Yeah, yeah… I LOVE that song!”

To which Joe said, “Ohhhhhhhh-kay….” And all the children in the room turned around and blinked at us in the awkward silence that followed.

Poor guy, I think he had mistaken our genuine excitement to hear our favorite, um, kid song for a heckle. 🙂 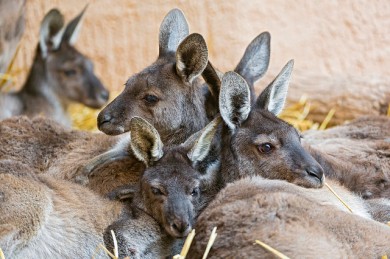 Ever seen Snuggling Kangaroos? Thanks to “Tambako the Jaguar” you have, via Flickr Creative Commons license.

And finally, a video of his Summer Song!