There’s SO Much Music in Austin!

There’s SO Much Music in Austin!

Are you burnt out by all of the events you attended as SXSW comes to a close for 2014?  Or did you avoid the madness at all costs because it just seemed too daunting with little people to keep tabs on?

I’ll admit it, I’m part of the second camp this year… I get so into the music that I lose track of the kids, OR I’m so focused on the kids that I can barely appreciate the music.  We attended just one “South By” event this year (do I still get my “Good Austin Mom” medal?) which was Wednesday’s School of Rock showcase in the enclosed beer garden of Scholz Garten on 17th and San Jacinto.   And that’s it.   My family is in an in-between stage right now, where we just can’t keep the boys close.  While I don’t miss pushing around a stroller or carrying around the diaper bag full of gear that having a toddler required, it *was* nice to have my charges on lockdown. Now I seem to be scanning an ever-widening circle of free-roaming boy energy, especially challenging when I’m parenting solo!

If you missed it entirely, don’t fret — more opportunities to hear live music in family-friendly settings are right around the corner!

Boss Street Brass Band — high energy, original songs, and loads of talent.
You do NOT want to miss them, because they’re going big, I guarantee it!

HONK! is a festival of community street bands who travel from all over the country to converge on a city for a weekend of free (OUTDOOR, no tickets required!) revelry.  They’re taking over our parks, coffee shops, parading through the streets — and even making an appearance at the brand new Thinkery!

Here’s the current lineup from their webpage:

I highly recommend Sunday’s parade.  Plenty of parking around the perimeter, and a revue of all the bands in a single location at the finale — with a great play-scape on site!  Bring a blanket and some snacks, and you’re good to go! 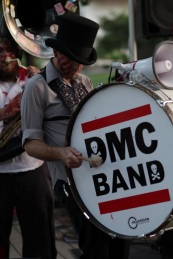 Dead Music Capital Band — a number of my friends and band-mates are in this group. I assure you they’re harmless, but proceed with caution because they might be a little scary for your littles. Or, as evidenced by MY family, your kid might decide after an impromptu march in their parade, to to BE a zombie. With a sharpie. Yes, he got nekkid. Yes, the sharpie was *everywhere.*

Hope to see you all there!