And Now For the BIG (Band) Finish!

The FINAL day of the Texas Community Music Festival began with a Jazz Brunch with La Grosse Tete, a seven-piece Dixieland ensemble who are especially unique in that they boast a washboard percussionist as their time-keeper!

The locally-famous Johnny Serrano leads the group from behind his banjo in the back line. Dave Stoddard, who hosts the annual Austin Traditional Jazz Society event at the Cap City Comedy Club is featured on the valve trombone, and Bill Troiano makes his 4th TCMF appearance (just this year!) on tuba.

Woot Talley and the Box were up next, and were Sunday’s only small group, with just three members onstage. However, they had more instruments per capita than any other we’d seen! 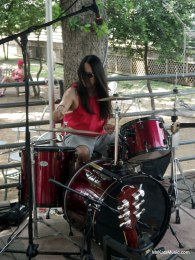 Woot himself brought three guitars, a harmonica, and his keyboards to bring his signature shuffling Texas blues to the TCMF, and his band consisted of a drummer and a VERY cool electric upright bass. Check them out:

At this point in the day, Mina Soto joined us on the covered deck to serenade us all as a showcase performer between the sets on the deck. 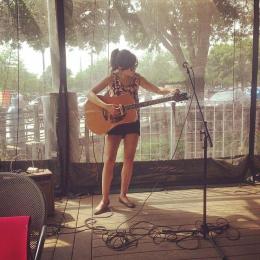 It was such a treat to have a soundtrack as we scrambled to set up 70 folding chairs! Here’s a video of the talented Mina performing in less chaotic surroundings:

From this point forward, the Festival was all about big bands and BIG BANDS!

First up, the Austin Civic Wind Ensemble brought about 60 members out to provide targets to the grackles! As the musical hosts of the TCMF, ACWE traditionally plays on both the opening AND closing day of each festival, making this the TWENTIETH performance by these festival founders. For this season’s program, each piece comes from a French composer or is a commissioned work with a French theme.

As a flutist, I can’t begin to tell you how impressed I am with Christina Ryan’s masterful performance of Chaminade’s “Concertino.” Unfortunately, I was unable to catch any video from within her supporting ensemble, 🙂 but you WILL have another opportunity to see her. Go to http://www.ACWE.org for performance details! 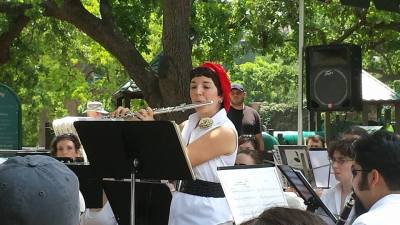 The Republic of Texas Big Band returned for *their* annual TCMF performance, with Lisa Clark gracing us again with her vocal stylings. 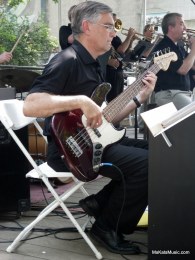 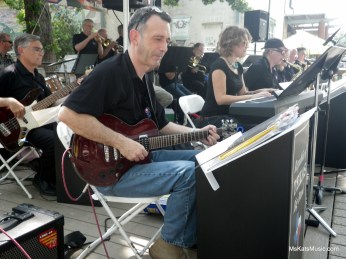 It was getting hot on the Central Market patio, and the music was just perfect for sipping a ginger lemonade in the shade of the big oak trees! Here’s Ms. Lisa relaxing everyone into the midafternoon.

The Austin Brass Band, led by the talented John Caputo, performed selections of British brass music. ABB is cross-pollinated with many members of the Austin Civic Wind Ensemble, so it’s always a treat to see so many familiar faces playing music! 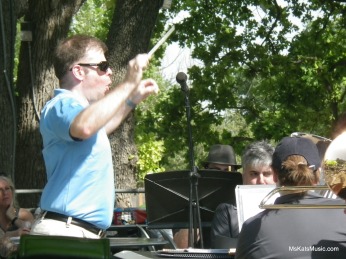 The highlight of their performance had to be the solo by David Hummel, who demonstrated the highest, lowest, and fastest notes a tuba can possibly play — be SURE to check out this video, if you thought a tuba just went “oompah, oompah” all the time!

NAJO trimmed the stage back down to a respectable size, making plenty of room for dancers to come back out and swing. Featuring the “lady of the day” — again! — Lisa Clark on vocals, the audience was treated to more favorites of the heyday of the big band. 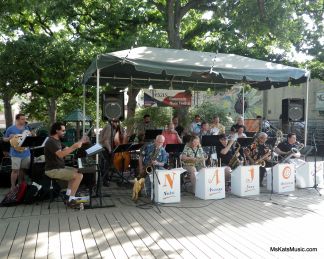 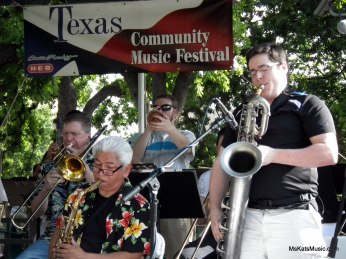 Pronounced “Nacho,” NAJO is Nacho Average Jazz Orchestra! Or is they??? You decide:

Next up was the BIGGEST BAND OF THEM ALL: The Band of the Hills! Band of the Hills is a wind and percussion ensemble composed of musicians from Cedar Park, Leander, Round Rock, Pflugerville and the surrounding area. They regularly bring upwards of 80 musicians to Central Market — we often have to rearrange tables to accommodate them all!

It was impossible to get the entire band in a single photo (I *nearly* did it, but one of the trumpet players blinked), so here are a few from various vantage points: 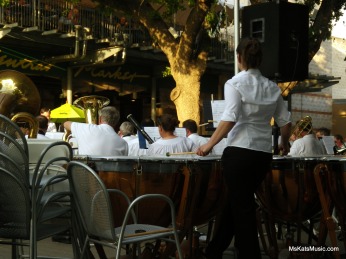 And here’s a grackles-eye view of their big, BIG sound!

One of our newest acts, The Vintage 15, returned to close the festival’s last night. They have become a new TCMF favorite! This year brought a change in personnel, with TWO new talented singers gracing the stage. 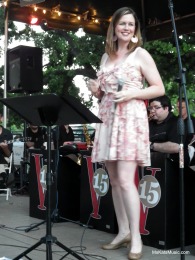 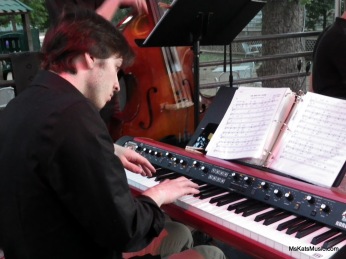 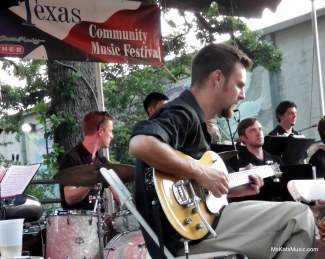 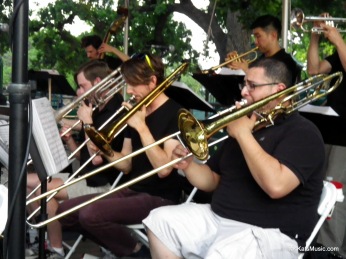 The Vintage 15 is probably one of the most prolific big-band acts in Austin, performing at the Brass House, the Speakeasy, the Satellite Bistro, the Domain, and at private parties and weddings throughout Central Texas!

And with that, the 2014 Texas Community Music Festival came to an end. Thanks to all of our volunteers, to all of the bands who come and perform (for NO charge, mind you!) year after year, and to festival founder Herb Holland and his supportive sidekick over the years, Jim Schwobel. Thanks also to Central Market and H-E-B for loyally hosting the TCMF, and to our community sponsors Strait Music, Russell Korman Jewelers, Special Addition Maternity and Nursing, and The Comfort Store.

I’ll be back next week resuming posts from the land of the Munchkins: the preschool world!